…just kidding!    I know you guys are out there doing your respective activities and chores.   It’s ME that has been absent for a long time.    So now I’m back.

No, it wasn’t you…its me.   Stuff happening just one after another, and although I thought about writing some of it in the blog, usually forgot about it until the next Big Thing came along.   Into some pouting, but that has been counter-productive, no one cares about most of the big-bugaboos that bug me.

Spending a lot of time playing with dolls…er, I mean getting dolls ready to list on ebay.  Back in my auction days a few summers ago I acquired a LOT of dolls.   Some I thought were next to worthless turn out to be money-makers, and some I hoped would make me rich were real duds.    As “doll people” know better than I do, Barbie Dolls can be worth their weight in gold…or not…bad hair days aside.   It seems most of these dolls don’t have any clothes, the ones that do have no shoes.     But Barbie never was just a pretty face, she has survived all sorts of adverse conditions, up to and including living out their lives with smiling faces in boxes and bags and drawers all over the world.

As for the “bad hair” which seems to be a characteristic of Barbie’s in general, price being no object, all their hair is subject to turmoil and stress.   On a whim, I googled “how to fix Barbie hair” and found all kinds of information on the subject very helpful, the  fact that much of the info is presented by eight-year-olds with video cameras notwithstanding.

The “test” Barbie looked like her waist-length black hair had been subjected to a wind tunnel.  So I followed the u-tubers advice, which involved washing the doll’s hair with shampoo or liquid soap, working up a good lather…then applying regular for-humans conditioner and rinsing it out.  Then the tricky part, brushing the doll’s hair.   The u-tubers say “never use a comb” but since I had to use a comb I did.   The trick is to start in the middle of the length of the hair, work downward toward the ends; then work in segments, not trying to do the entire length of the hair in one swoop.     It works like a charm…at least on that one Barbie.    The utube experts say the technique works on many other kinds of dolls.   I suppose the key is the rooted grounding of the hair in the scalp, not held together with glue.

Well…I must say it feels good to write a blog entry. 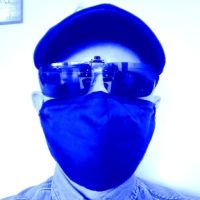